Lance will reveal the 5 cash kingdoms of business & onboarding.

Lance began studying Martial Arts 15 years ago in Aspen, CO under Jim Dohan, a multiple Black Belt in Small Circle Jiu Jitsu and American Kenpo Karate. During his stay in CO, he received his Black Belt in American Kenpo and worked doing security for many night clubs and private companies in the Aspen area. After receiving his Black Belt, Lance went on to teach many defensive tactics seminars around Colorado to different law enforcement and military agencies including the Boulder Police Department, Denver Sheriff’s Department and at the United States Air Force Academy in Colorado Springs. He had his MMA debut in 2000 in Durango, CO and went on to have an undefeated professional record of 3 – 0. Lance also worked with Judo Black Belts Don Martinez and Chris Blanton in preparation for his MMA fights and before moving back to Maryland in 2004. He currently trains in Brazilian Jiu Jitsu under Third Degree Black Belt Vicente Junior and received his Black Belt on December 1, 2012. Lance’s training and achievements in BJJ are ongoing with multiple NAGA and US Grappling advanced and purple belt gold medals along with two Pan American International metals, a silver in 2008 and a bronze in 2010.

Lance is an 11 year school owner just outside of Baltimore Maryland. Lance started his bjj academy in the back of a friends taekwondo studio with 3 students and today has grown over 600 students and generating well over a million dollars a year. Lance has taken the systems and process that it took to grow this school and is sharing it with other hundreds of other Martial Arts schools owners so they don’t have to waste money learning the hard way like he did.

340 | How to Build an ARMY of Influencers to Promote your School! 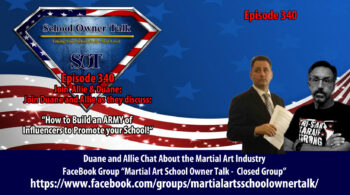 340 | How to Build an ARMY of Influencers to Promote your School! 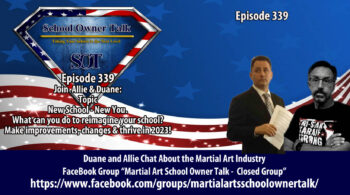 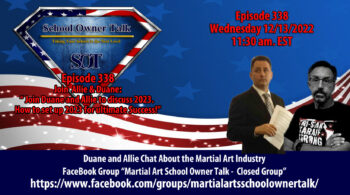 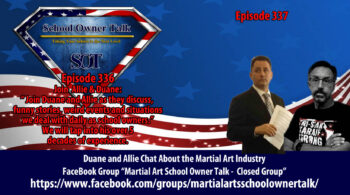 This site uses Akismet to reduce spam. Learn how your comment data is processed.

Looking for a topic?

Be A Part Of The Show!

Submit a comment or question & we will respond on the next episode!
The Retail Wonderland, online course is a one of a kind program. Allie Alberigo is the owner of multiple martial art schools and a retail store for the last 28 years. In this program you will get a retail wonderland PDF workbook and two training video's teaching you everything you need, to kill it this year and EVERY year after this! Allie teachings concepts not thought of in retail within a martial art school as well as how to display, merchandise and products that are out of the box products that sell really well withing you school. Allie has consistently had sales throughout the year, that make $10's of thousands of dollars and show his coaching clients what to do to market, set up and purchase the products. This is worth 1000 times what is being charged. It is time to take that step and become a retail entrepreneur. 100% money back guarantee on this product if you are unhappy. CLICK HERE to access it now!